1. Labyrinth Labyrinthos A girl and her cat fall through a looking-glass into a dark labyrinth full of strange people. 2. Running Man In the distant future, a tough racer uses his psychokinetic powers against his opponents during his final race. 3. The Order to Stop Construction A snooty salaryman is sent by his bosses to the jungle to stop a completely automated construction job, and spends several days there arguing with the robots.
Characters 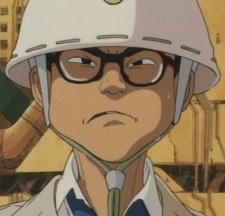 Sugioka, Tsutomu
杉岡勉
Because we are making use of some free resources to reduce the main server load, the player can be opened on another domain or showed as a new tab (you have to allow pop-up if you're not using Chrome).
Bookmark(1)