Description Characters Episodes
Remake of the first series. When Mt. Bikkura erupts a huge egg one day, a chubby little dinosaur name Guzura hatches out of it. The series follows his misadventures as he interacts with humans as well as other animals and creatures 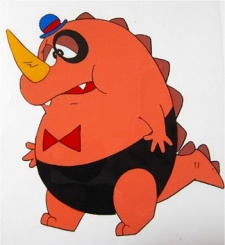 Papa
パパ
Because we are making use of some free resources to reduce the main server load, the player can be opened on another domain or showed as a new tab (you have to allow pop-up if you're not using Chrome).
Bookmark(0)